Jared was born during haying season and raised his entire 16 years on our family dairy farm, Aldor Acres Dairy in Langley. Jared was known for his handsome smile, his kindness to all, and his incredible work ethic. As a baby he loved to stand on anything with wheels, we were always worried he would knock his teeth out! As he grew, so did his love of the outdoors. He and his brothers would dig holes and build forts as deep as they could go. He fashioned bows and arrows from scratch with materials he would bring home from the bush. The kids loved to spend time together target shooting. He spent his final summer in the mountains at a hunting camp, a place where he felt at home.  He’d never ridden a horse before that trip, but he was there to work, so he saddled up a horse and jumped on and fit right in. He was looking forward to going back to the mountains again soon.

Jared’s passion for dairy farming was evident from as early as 2 years old, he could be found with mom or dad raking beds with a shortened rake.  He treated all the animals with respect and loved the calves and cats during his daily chore time duties.  Once the DeLaval VMS was installed in the spring of 2012 Jared’s chores changed and he was interested in the new style of milking and had a great understanding of herd management. He was also employed off the farm milking cows at Devalera Dairy Farm a few times per week.

Outside of farming he was a rugby player at DW Poppy high school and the Langley Rugby Club, proud 4-H member of the Langley Beef & Swine Club, and respected member of our family.

At home Jared was a lover of family, practical joker, couch stealer, jam maker, burgeoning cook and the eater of all the fruit.  Jared was the much-loved son of Brian and Erin Anderson, and the brother of Brianna (18), Gabriel (13), and Reid (11).  He left us suddenly, and far too early. He leaves behind the grieving communities of Fort Langley, BC 4-H, D.W. Poppy Secondary School, and the Langley Rugby Club. Our family is very grateful for all of the prayers and support. Forever missed but always in our hearts.

A Celebration of Life was held on February 12/15 to a full house at Christian Life Assembly in Langley. 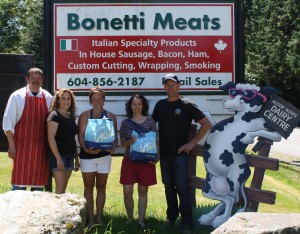 And the Winners are;

Our 2 winners were drawn from the (milk) bucket and have been contacted.

Thank-you to all of the teaching staff that visited with us during the spring months of 2014!

Erin and I really had a fun season with your classes and groups that visited the Dairy Centre.

We were so excited to offer a chance www.aldoracres.com/teacher-contest  to each and everyone of you, an entry in the draw for a 1/4 of our ‘Farm Raised Pork’ (yes fed lots of milk btw!).

By Erin Anderson
Dairy cows can’t digest grass any better than we can!  It’s their rumen (1st of 4 stomachs) that is filled with microorganisms that break the feed into more digestable components to be processed further down the line.  The four stomachs are called:
Study up!  There may be a quiz for extra chocolate milk!